Binance.US Review 2021: Low Fees, But Investors Should Take a Pass

The NFT Market Is Already Centralized

Each day new tokens appear in the cryptocurrency asset class. Investors, traders, and speculators continue to scour the market for the next token that will produce Bitcoin-like returns. In 2010, Bitcoin was worth only five cents. A $1 investment bought 20 tokens that, by Apr. 14, 2021 had risen to a value over $1.31 million when the leading digital currency reached its most recent peak at $65,520.

Ethereum, the second-leading crypto, had traded as low as under 60 cents in October 2015. On May 12, Ethereum reached a high of $4406.50. A $100 investment in Ethereum at 60 cents in late 2015 was worth nearly $735,000 at the recent high. Returns like these are magnets for speculators looking for the next token that will take off into the stratosphere.

It is hard to believe that an asset called PancakeSwap (CAKE) has a market cap of over $5.1 billion and is in the top forty in the digital currency hierarchy. Refinable (FINE) is a new token geared to the burgeoning NFT or non-fungible token market. While FINE is ranked only 3,030 according to CoinMarketCap, the NFT token could rise precipitously with the emerging digital market.

If Elon Musk, Snoop Dog, Mark Cuban, and others are Dogecoin fans, it is not likely to take long for other celebrities to develop an affection for PancakeSwap (CAKE), just based on its name.

PancakeSwap describes itself as a Binance Smart Chain-based DEX (Decentralized Exchange) launched by anonymous developers with a penchant for breakfast foods and rabbits. The token and protocol product for community governance, the ability to farm liquidity provider tokens, incorporates other features that allow users to earn rewards.

“Flip the CAKE, collect the SYRUP and stake them with PancakeSwap, the best-decentralized exchange on the Binance Smart Chain.”

A bull market in Pancake tokens

The price action in CAKE is another reason why speculators are flocking to cryptocurrencies, searching for the next token that will deliver breathtaking returns.

A non-fungible token or NFT is a unit of data stored on a digital ledger, or blockchain, that certifies a digital asset to be unique and not interchangeable. NFTs can represent photos, videos, audios, and many other types of digital files.

In March, an NFT piece of artwork sold at Christie’s auction house for $69 million. The buyer received the digital file for that sum, and that is all.

The art was one-of-a-kind, it was property, but it has no tangible configuration in its original form. The digital token is a certificate of ownership. Only one owner of record appears on the blockchain. The NFT is the proof of ownership of the original work.

Anything can be tokenized and sold as an NFT. On Feb. 19, an animated GIF of Nyan Cat, a 2011 meme of a flying pop-tart cat, whatever that is, sold for more than half a million dollars.

Recently, Grimes, the musician and partner of Tesla’s Elon Musk sold some of her music for over $6 million. Jack Dorsey, founder fo Square (SQ) and Twitter (TWTR), is promoting his first-ever tokenized tweet with bids hitting the $2.5 million. People selling these NFT’s have been dubbed “crypto grifters.”

Refinable just came out and is the native NFT asset

If NFT’s are making millions, why not have a token that reflects the new marketplace. Refinable (FINE), on its website, says it is:

The FINE token is ranked at 3,030 out of the 9,753 cryptocurrencies floating around in cyberspace. The token is too new to have any data on its market cap, but it does have a price history. 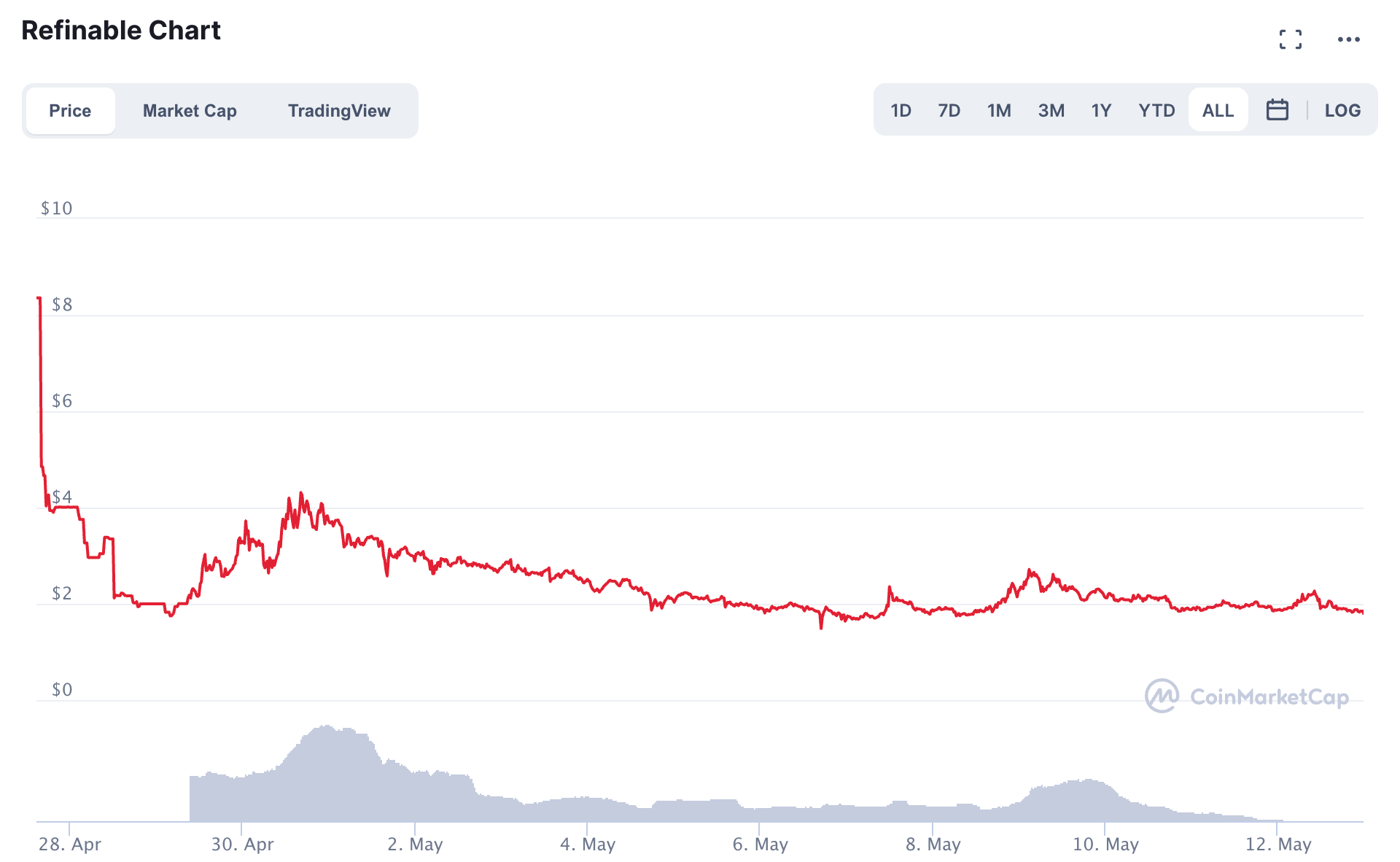 If the NFT market continues to grow, FINE could be a bargain at below $2 per token. It could also wind up in the crypto scrap heap with thousands of other digital currencies.

Only invest what you can afford to lose

I am a hands-on guy who likes to touch and feel assets. If I own a stock, it is comforting to know it has a headquarters, a plant, property, and equipment. It also has managers and employees. When I own a fiat currency, I can stick it in my wallet, a safe, or the bank. I can hold and store commodities and can live in real estate.

It’s going to take me a while to get used to the new cryptocurrency assets. NFTs and the tokens that reflect that market are at another level which will require some retraining of my brain and I’m not there yet.

Meanwhile, when it comes to PancakeSwap, Refinable, and all the new assets flooding into the market, I am only investing money I can afford to lose.

Warren Buffett called digital currencies “financial rat poison squared” a few years ago. Recently, his partner Charlie Munger said the asset class is “disgusting and contrary to the interests of civilization.” Munger “hates” the success of the market.

The bottom line when it comes to cryptocurrencies or NFTs only spend what you are willing to forfeit. You could make a fortune, but the risk is always a function of reward, so every penny invested is at stake with these investments.